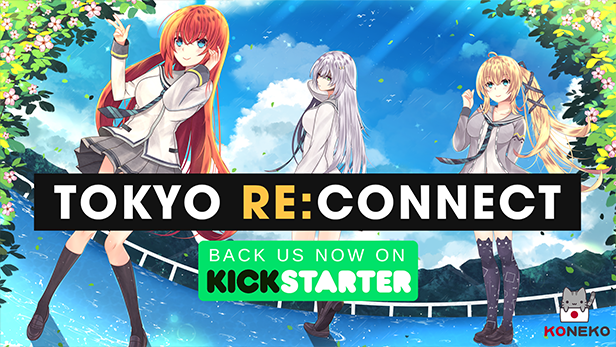 Tokyo Re:Connect is an Original English Language Visual Novel (OELVN) for Windows, Mac, and Linux. With a romance-driven story full of colorful heroines, this game incorporates modern gameplay and features for a highly interactive and customizable experience.

You play as the protagonist Shindou Touki, who moves from the countryside to Tokyo, to begin a new chapter in his life. Navigate through various choices and the life of a high school student in the city, as Touki learns what it means to connect with others. Including over 25 hours of gameplay, detailed CG, and a moving soundtrack – all in high definition – your choices will affect the path you take.

Spring Is the Season of First Meetings.
On the advice of his older sister, Touki transfers into Ainoshima Gakuen in the middle of the spring term. His heart is full of expectation of a new life in the city of Tokyo, a vast contrast to the countryside that he grew up in.

As he begins to settle into his new life, he encounters fresh faces in the student council president, Ayumi, and an underclassman who admires her, Kuon. What Touki was not expecting was to converge paths with Saya, his childhood friend from a few years ago, who he hadn’t talked to since a certain incident.

To make matters more complicated, a mysterious transfer student arrives shortly after. She seems to loathe him immediately and Touki feels that he has met her somewhere before.

Within the chaos of the present and the mystery of the past that is chasing him, there is uncertainty in the air as he forges a path towards his future and his desire to connect with others. 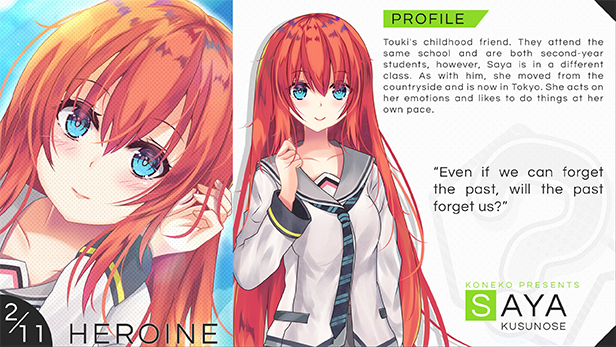 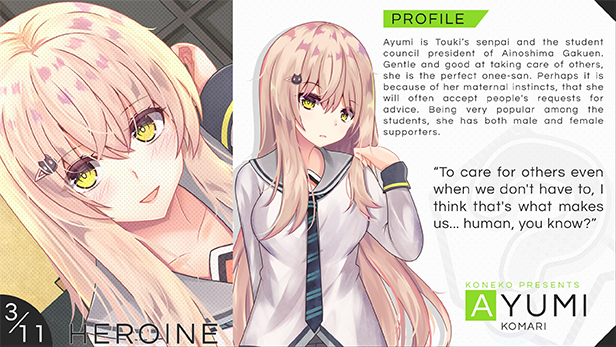 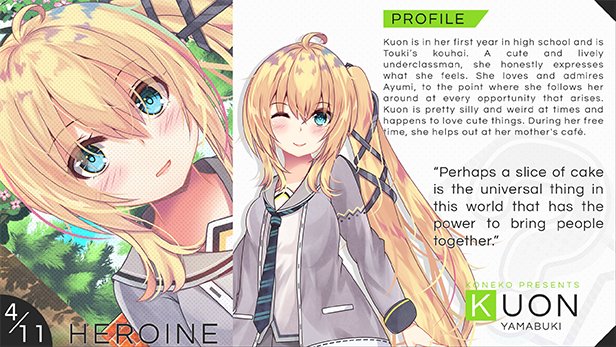 ► EPISODIC WRITING – Unlike traditional visual novels, Tokyo Re:Connect is presented in an episodic format. This makes the story more digestible, and also means that the player can replay from a specific point in time, without having to create extra save slots.

► CHOICE-DEPENDENT STORY – As well as the main episodes, there will be individual routes for each heroine in the game. The routes are dependent on the choices made throughout these episodes, and those thereafter will affect the outcome to the heroine’s story.

► MODERN PRESENTATION – Many interactive and dynamic elements have been incorporated into the gameplay. From emojis displaying when characters are in a certain mood, to the CG Inspection Mode that turns a static background into a point-and-click scenario, Tokyo Re:Connect aims to deliver mechanics that go beyond the norm.

► CONTROLLER SUPPORT – Despite being released for the PC, this game supports the use of various controllers for the player’s convenience. Additionally, the flexible interface allows for switching on demand, and the ability to map your own controls.

► CUSTOMIZABLE GAMEPLAY – Through the settings of the game, the player can change almost anything that is displayed, so that the gameplay can be tailored to individual needs. Don’t like the CG inspection mode? Switch to the standard reading view. Not a fan of the default textbox appearance? Change the style to a different shape, screen position, and even color.

► NATIVE 4K RESOLUTION – The inclusion of high-definition assets means that you can enjoy up to 4K native resolution, which also supports the zooming feature of the game. Our state-of-the-art programming methods also incorporate users on low-spec machines, so that you can install and play without worrying about resources.

► DEDICATED SOUNDTRACK – Immerse yourself in Tokyo Re:Connect’s dedicated soundtrack, with seamless looping and accessibility outside of the main gameplay.

Click On The Below Button To Start Tokyo Re Connect Download. It Is Full And Complete Game. Just Download And Start Playing It. We Have Provided Direct Link Full Setup Of The Game.